Leighton Hospital plays an important part in the local community. The current MRI scanner in place works to full capacity between 8am and 8pm, seven days a week, and a new MRI scanner is needed to allow the hospital to continue delivering first-class healthcare to over 300,000 people living in Cheshire, Staffordshire and the surrounding areas.

Alextra Accountants have conquered the skies with eight members of their team completing skydives from 10,000 feet. They have been fundraising for Leighton Hospital’s MRI Scanner Appeal and have raised a fantastic amount of £3,523.00.

Alextra’s charity skydive started on 23rd April with an early 8am check in, followed by training provided by the Tilstock Airfield in Whitchurch. The team of eight were then split into three groups. Each group then took their turn to take to the sky to complete the skydive mission.

Alextra Director Shawn Gallimore, who was one of the eight skydivers said:

“This is one of the most amazing experiences I have had the pleasure to be a part of!

The whole team had such a fantastic time. There was a great sense of spirit and camaraderie amongst us and even the spectators who came to show their support.

The MRI Scanner Appeal is a great cause and it makes the whole experience worthwhile knowing we are supporting the local community. I on behalf of Alextra would like to thank everyone who has shown their support through donations and well wishes, it is very much appreciated.”

“I would like to sincerely thank the Alextra Accountants team for taking on this fantastic and very brave challenge in support of our MRI Scanner Appeal. It is wonderful to receive such support from a local business, particularly at this stage in the appeal, and thanks to them we are now even closer to our target.”

Full updates of the Alextra Skydive can be seen via the Alextra social media channels, including YouTube where a full video of Alextra Director, Shawn Gallimore and admin member Farrah Oliver’s, tandem skydive can be viewed! 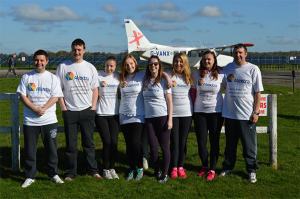